What should be clear to the whole world watching the debt-ceiling battle is that the Republicans are far more intent on taking the president’s scalp than balancing the nation’s books. They had ample opportunities to do the latter during the eight years of George W. Bush.

House Majority Leader Eric Cantor, R-Va., has been especially relentless in the debt-ceiling fight. He attacked this first African-American president with a palpable disrespect not only for Obama personally, but also for his esteemed office.

Following what Senate Majority Leader Harry Reid, D-Nev., called Cantor’s “childish” display during a meeting with Obama, the House majority leader complained that the president had cut short the meeting and stormed out of the room. “He shoved back and said, ‘I’ll see you tomorrow’ and walked out,” Cantor snidely told reporters— as though the president needs his permission to end a White House gathering.

That encounter might have reminded Obama of the open letter Frederick Douglass, a runaway slave and abolitionist who became one of this nation’s first black diplomats, wrote to his slave master.

It would be “a privilege” to show you “how mankind ought to treat each other,” Douglass told the man who had badly mistreated him. “I am your fellow man, but not your slave.”

Douglass’ words might have prompted another reflection when, during a critical point in the debt negotiations, House Speaker John Boehner, R-Ohio, contemptuously waited more than half a day to return a call from the president.

Or, Obama might have heard Douglass’ words ringing in his ears after acting House Speaker Steve LaTourette of Ohio had to warn his GOP colleagues during a heated debt-reduction debate on the House floor to stop making disparaging remarks about Obama.

This total lack of respect is downright contemptible — if not unpatriotic. Such contempt, I’m convinced, is rooted in something other than political differences. Today, you might not see the overt actions of racist southern governors like Ross Barnett or George Wallace in the 1960s. But the presence of Jim Crow, Jr. — a more subtle form of racism — is there.

It’s possible to blame the raw rhetoric and tension between the president and the Republicans on the summer heat, the unflinching media scrutiny on the debt ceiling negotiations or next year’s elections and the gamesmanship that Washington thrives on in these sort of dust-ups.

On the other hand, maybe Wickham is right. Maybe the Republicans have a deeper seeded issue with Obama. Like a racial one.

The latest example comes from Rep. Doug Lamborn of Colorado:

“Even if some people say, well the Republicans should have done this or they should have done that, they will hold the president responsible,” said Lamborn said Friday during an interview on a Denver radio station. “Now I don’t want to even have to be associated with him. It’s like touching a tar baby and you get, you get it, you know… you are stuck and you are part of the problem now and you can’t get away.“

The sooap that makes you dirtier, not cleaner.

Lamborn may just be a lamebrain who had no idea of the racial (and racist) implications of such a loaded phrase.

But how many “accidents” does it take before it stops being accidental and starts being deliberate? How many times can the nation’s first Black president be taunted, mocked and insulted based upon his race before it becomes clear it is based on racism?

How far does it have to go? Does someone have to stand in the well of the House or Senate and drop a “N-bomb” on Obama before there’s no denying it anymore?

Apologists for Lamborn have said he meant no offense by the reference and people who are offended now were probably the same ones who were offended when the word “niggardly” was used by another politician years ago.

“Niggardly” isn’t an insult. Niggardly means cheap, not a dark-skinned person of African heritage. “Tar baby” is an insult and if you doubt me, try calling any sentient Black man by that name and see how they react (but you might want to take a step or two back first).

Since we’re mucking around deep in the Cliche mine, let’s excavate another one while we’re in here. It’s called “playing the race card” and you don’t have to be Black to pull it and throw in on table as a device to shame guilty conscience liberals into spasms of White guilt.

Lamborn the Lamebrain and his victim.

White folks can pull it too–and they do. They do it when they want to dog whistle to the real hardcore racists, that they got their back. “Pssst…I can’t say it out loud, but I can’t stand ‘those people’ either.”

Did anyone’s ears just perk up?

Lamborn apologized to the president and says he “regrets any misunderstanding” over his comments.  What’s to misunderstand?  How many times do most people say “tar baby” in a year?

An apology is meaningless when it’s issued only because you got caught in the act of being stupid, insensitive, crude, but mostly racist.

An apology is worthless when it’s issued after the dog whistle to the really hardcore racist that you’re sorry you said it (but really you’re not sorry at all).

An apology is garbage when you know what you said is what you meant and the “apology” is just to cover your ass.

Apologies are meaningless when they come from Republicans after they have made racist remarks because as sure as God made little green apples, there’s going to be another Republican coming down the chute to say something even more racist.

Kill that noise.  Apology not accepted.
Forward these bullshit lies to someone who will happily swallow them. Try Herman Cain. He specializes in absolving White Republicans of racism. He’d probably love the gig. 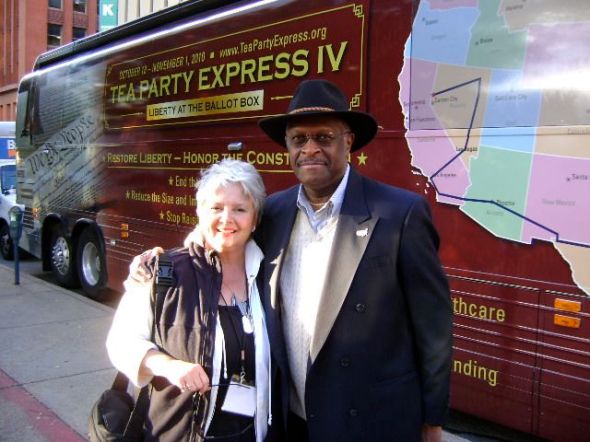 The Herminator Gets All the Women. Gotta be the hat.